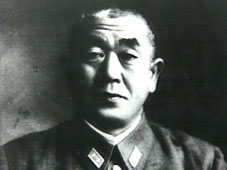 Why I visited Lieutenant General Kotoku Sato’s Tombstone and his Memorial Shonai-machi, Yamagata Prefecture on 16th and 17th November 2010

I became very interested in Lieutenant General Sato, because my father, Taiji Urayama, was a lieutenant (veterinary surgeon, 31st Regiment Mountain Artillery) in the 31st Division which was under the command of General Sato.  Mr. Hirakubo, a previous chairman of the Burma Campaign Society (I am the present chairman), was also a lieutenant (supply officer, 31st Regiment Mountain Artillery) in the 31st Division. I strongly believe that both my father and Mr Hirakubo owe their lives to the battlefield decisions taken by General Sato.

Thus I became motivated to look not just into the exploits of Lieutenant General Kotoku Sato, (1896 to1961), but also his character and personality.  Lt General Sato, who was once stigmatised as dishonourable and insane, made such a crucial decision to withdraw his men of the 31st Division of the 15th Army from the Kohima Battle, the front line of the Imphal Operation.

During the battle Lt. General Sato disobeyed his General’s order to advance, and instead pulled his troops back to the nearest food and ammunition dump to save his men from starvation, deadly diseases and dying from their wounds.
Not long after this the British-Indian army regained the Naga area completely, thus ending the Imphal operation.

The catalyst for my realisation about the lingering animosity of some ex British soldiers was the visit to the UK by the Japanese Emperor in 1998, which brought about demonstrations and anti-Japanese sentiment.  About this same time I met Mr Hirakubo, who was chairman of the Burma Campaign Society (BCS), an organisation set up to bring about reconciliation between Japanese and British old soldiers who had fought in Burma. On the death of Mr. Hirakubo in 2008 I became chairwoman of BCS.

So this is how I became involved in BCS trying to bring about reconciliation between old foes. Also I have been living in the UK for over 20 years now and I have been married to a British man for 28 years, which has helped me understand both sides and viewpoints.

I knew that General Sato came from Shonai City in the Yamagata region of Japan and was interested in visiting his home town and visiting his grave and memorial. I also hoped that I could meet his relatives to gain more knowledge about him.  So I contacted the local government in Shonai City in August 2010 and Mr Keinichi Okuyama, Deputy Mayor of Shonai invited me to give lectures at the University and their town office when he learned that my husband and myself were planning to go to Japan in November.

General Sato’s decision during the Kohima battle to withdraw his men to a position at the rear branded him a disgraced officer in the eyes of his superior, General Mutaguchi.  Mutaguchi had a military doctor examine General Sato and he was deliberately diagnosed as insane, purely because he refused to sacrifice his men in a battle he knew was impossible to win. Then General Mutaguchi demoted General Sato and transferred him to the Philippines as a punishment for disobeying his orders. Mutaguchi did not have General Sato court martialed because he did not want his own incompetence in planning and executing the mission to be scrutinised in a courtroom, thus General Sato never had a chance to clear his name and show how his men were sent into battle with insufficient food, ammunition, medicine, etc.
The Mayor and people of Shonai-Machi were very happy to invite me to their town, someone who knew and understood about the true character of General Sato i.e. that he was an honourable man who only withdrew the 31st Division from the Kohima battle because he had the safety and welfare of his men at heart.

On my arrival in Shonai-Machi I was greeted by the deputy mayor Mr Okuyama and by a regional TV cameraman by the name of Masahiko Hasegawa. I had not been informed that TV camera would be waiting for me at the station together with the deputy mayor.  Next I met Mr. Sachio Sato who is chairman of an association that has been set up to honour the memory of Lieutenant General Sato.  Then Mr. Okuyama, the deputy mayor, drove Mr. Sato and me to the cemetery to pay respects at the grave and memorial to General Sato.  Here I dedicated the poppies and translated the messages which had been kindly given by Mr Bob Cook, curator of the Kohima Museum in York.  At the cemetery I was overwhelmed to find that there were many heads of local associations and several newspaper and TV reporters waiting to ask me questions about the reasons for my visit.  I really wanted to visit General Sato’s grave so that I could thank him for saving my father’s life during the Kohima battle by withdrawing his men.  Because it is evident to see that I would not be here today if it was not for this decision.  I also felt very strongly that I should be a bridge between Japan and the UK to bring about a much better understanding between our nations.

In the afternoon I was invited by Professor Machiko Ito of Tohoku University of Community Services and Science to give a lecture to about 150 people mainly consisting of students and general public about how to bring about reconciliation by citizens activities and develop mutual understanding.  As part of the lecture I explained about what has been achieved at BCS (formerly Burma Campaign Fellowship Group) to bring about reconciliation between UK and Japan.  This organisation was formed by Mr. Masao Hirakubo, Mr .Guilym Davies and Mr. Hirwen James in 1983 all of whom were former foes. Later in the evening I was invited to a welcoming party attended by Mr. Jun Hino, local historian and curator of the Shonai Machi regional museum, General Sato’s nephew Shigehiko Sato, a banker, Mr. Maki Harada, the town mayor and Mr. Toru Togashi who is Chairman of the Shonai Town Assembly.

At this meeting I explained to the assembled twenty or so guests about how, at all levels of society we should be more grounded in the culture, histories and people of other nations so as to avoid misunderstanding that could lead to chaos and war.  Especially Japanese people should try to express their feelings and views to the outside world more often and with a louder voice because far too often they hesitate to voice their opinions clearly.

Just before this meeting I met Mr Koichiro Wajima (private 2nd class) who is 88 years old and served during the Imphal mission.  He told me and the assembled reporters how he and his platoon encountered a group of British soldiers in the jungle during the night.  The British side started to fire at them, at which point they counterattacked, using their out-date weapons, aiming to knock out their heavy machine gun.  The following morning they discovered British soldiers lying dead as well as several of their own men.  At this point he burst out crying and said “I remember now clearly” After a pause he went on with tears “I regret that I could not bring them back home to their families.”    I held his arm to comfort him and said to him that I was also told by ex-British soldiers that, whichever side wins it does not matter because war just brings misery to everyone involved.  He then repeatedly said “Whichever side wins war is no good, war is no good, never engage in war”.

Note:  85,600 Japanese soldiers participated in the Imphal Mission, 30,000 died in action, of starvation and illness and 20,000 were injured or succumbed to  malnutrition and illness.  The road between Kohima and Imphal was called “White Bone Road” on which lay the remains of many corpses in military uniform who have never been taken back to their home.